Instructors You Will Be Learning From 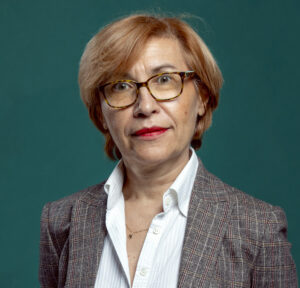 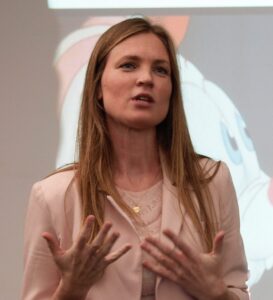 EXTERNAL COLLABORATOR FOR RESEARCH AND DEVELOPMENT​

Food engineer and Ph.D. in industrial microbiology. Research associate at Food Technology and Biochemistry Department at Faculty of Agriculture University of Belgrade. Specialized in edible and medicinal mushrooms with a decade of experience in mushroom quality and biological activities research. She is in charge of product development focused on innovation with minimal processing. She has given several pitch presentations with the goal of merging the science and practice of Ekofungi. 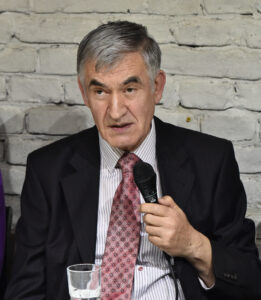 EXTERNAL COLLABORATOR FOR RESEARCH AND DEVELOPMENT​

Ph.D. Milan Adamović, scientific advisor, expert in domestic animal nutrition and animal food production. He worked at the Institute for Science Research and TechnologyTransfer in Agriculture – PKB Agroekonomik, Belgrade and the Institute For Technology of Nuclear and Other Mineral Raw Materials, Belgrade. He studied the technology of animal nutrition, modern procedures for processing animal food, the use of by-products of processing plant and animal products and yje industrial cultivation of oyster mushrooms (used compost) in cattle nutrition. Author of the monograph Nutrition of high-yielding cows and several manuals and practicums in the field of cattle nutrition and animal feed production. He has written over 380 scientific and professional papers, given a number of lectures to students, agronomists and farmers. Author of meal optimization software for domestic animals. Participant in a number of scientific congresses, symposia and conferences.

Instructors We Learned From 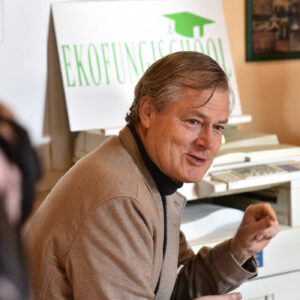 Gunter Pauli was born in Antwerp, Belgium, in March 1956. In 1979 he graduated as “Licencié en Sciences Economiques” from Loyola’s University (today University of Antwerp) in Belgium and obtained his masters in business administration from INSEAD in 1982 at Fontainebleau, France thanks to a scholarship from the Rotary International Foundation. During the time he was studying, he held the most diverse jobs in order “to sustain family, education and to save money, which permitted extensive traveling during the summer holidays”. In 1978 he was elected as national president of the students’ union AIESEC.

His entrepreneurial activities span business, culture, science, politics and the environment. Under his leadership, Ecover pioneered an ecological factory in 1992, featured on CNN Prime Time News. He founded the “Zero Emissions Research and Initiatives” (ZERI) at the United Nations University in Tokyo, and subsequently established The Global ZERI Network as a foundation, redesigning production and consumption into clusters of industries inspired by natural systems.

He is dedicated to design and implement a society and industries, which respond to people’s needs using what is locally available. His visionary approach supported by dozens of projects on the ground landed him an invitation to present his cases at the World Expo 2000 in Germany. There he constructed the largest bamboo pavilion in modern days presenting 7 breakthrough initiatives. It became the most popular pavilion with 6.4 million visitors. Unfortunately, the pavilion was destroyed after the Expo. However the original built in Manizales, Colombia still stands as a symbol for the Coffee Region.

His latest initiatives include the design of a solution for the plastic soup floating in the oceans and the creation of a protective zone with islands to avert rising sea levels. He is actively involved to ensure that the largest herd of rhinos (2,400 in Kaziranga National Park in India) will be free of poachers thanks to an intensive economic and community development program in coordination with organic tea plantations.

He has been visiting lecturer and professor at universities in on all continents, and Member of the Board of NGOs and private companies in Asia, USA and Latin America. He has advised governments, entrepreneurs and industry leaders on how to implement breakthrough innovations that permits society to better respond to the basic needs of all, starting with water, food, housing, health and energy. He works with what is locally available, focuses on the generation of value.

He is a Fellow of the World Academy of Arts and Sciences (San Francisco, USA), a creative Member of the Club of Budapest (Hungary), Member of the Club of Rome, moderated the Roundtable of Nobel Science Laureates hosted by HM King of Jordan State and obtained a Doctorate from the Italian Government in systems design. He has been awarded an Honorary Doctorate by the University of Pécs, Hungary.

Gunter has published 20 books (written 16 – edited 4), which have been printed in +30 languages and 365 fables bringing science and emotions to children. Over 17 million copies have been distributed worldwide. One of his fables “The Strongest Tree” is available in over 100 languages. His latest  book published in April 2015 “The Blue Economy 2.0: 200 projects implemented, $4 billion invested and 3 million jobs created” is the new reality inspired the vision of his Report to the Club of Rome presented on November 2, 2009.

His next book “From Deep Ecology to Blue Economy: 21 Principles of the New Business Model” will be forthcoming in the Fall of 2016. He is father of five sons, one daughter (Adopted) and married to Katherina Bach. Fluent in seven languages and having resided on 4 continents, he is a world citizen. 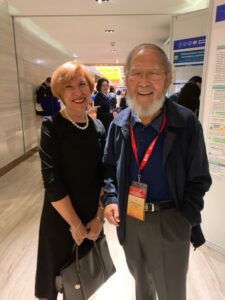 Many may not know this but Shu-Ting Chang is considered to be the father of medicinal mushrooms.
S.T. Chang was born in 1930 in Shanxi, China. He graduated from the Department of Agronomy at the National Taiwan University in 1953 and afterwards studied abroad in the USA. He obtained a Master of Science degree in 1958 and a Doctor of Philosophy degree in 1960 at the University of Wisconsin. In 1958, he was invited to teach in the Department of Biology at the Chinese University of Hong Kong. He retired in 1995 and received an honorary professorship the same year. In 2012, he received the award of Honorary Fellow of the Chinese University of Hong Kong.
Professor S.T. Chang has devoted himself to the study of mushroom biology since the 1960’s. Because of his impact, international mushroom conferences started to be held in China. Upon his urging, medicinal mushrooms became the focus of discussion at the international conferences where previously only edible mushrooms were discussed. In 2005, Professor S.T. Chang was named the Father of Medicinal Mushroom at the Third International Medicinal Mushroom Conference, in recognition of his contributions to the promotion of medicinal mushrooms.
He has over 220 published scientific papers and authored on 23 books. He is also one the initiators and editors at the International Journal of Medicinal Mushrooms.
S.T. Chang just recently turned 85 and is still working hard to promote medicinal mushrooms all over the world. 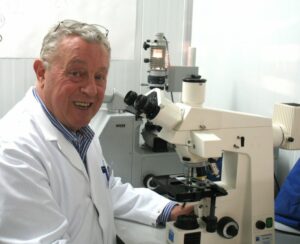 Over several decades, Dr. Leo has made prominent contributions to the world of mycology and medicinal mushroom science. During his distinguished career, he has published more than 40 papers in the field of medicinal mushrooms, written 5 books, contributed over 150 scientific articles.

Dr. Leo’s work is truly global in scale – he has published papers on medicinal mushrooms with collaborators from Thailand, Turkey, Russia, China, countries of the former Yugoslavia, and others. He speaks four languages (Dutch, German, French, and English) and recently celebrated his 78 th birthday.

For more than 50 years, he has passionately approached science and made important contributions as a professor, researcher, speaker, guest scientist, cultivator, and more recently as co-owner and Director of Research for Fungivital and Mushrooms4Health BV. He credits his good health and vitality, in part, to a mushroom he’s been studying and consuming for decades: Agaricus blazei Murill. He lives with his wife of 50 years in the south of the Netherlands and remains actively engaged in medicinal mushroom scientific research.

Since 2014, he has served on the editorial board of the first scientific journal in medicinal mushrooms — the International Journal of Medicinal Mushrooms (IJMM). He has published more than 40 papers in the field of medicinal mushrooms, including. Dr. Leo’s work has been featured in several prominent journals, including PLoS One, Molecules, Food & Function, Food Research International, Carbohydrate Polymers, Journal of Bioenergetics and Biomembranes, and Food Chemistry. A list of his 100+ research contributions, publications and books can be found online here.

Leo started his academic career at Wageningen University in 1959. In 1966, he graduated with a degree in phytopathology, with virology as a major and biochemistry and colloid chemistry as minors. At the time there was no such science as molecular biology. In 1962, he worked as a student trainee in the Virology Lab at Purdue University in West Lafayette, Indiana. In 1969–1970, he did his post doctorate on experimental leukemia research at the Hospital St. Louis, Paris, France. Afterward he continued his work on  experimental leukemia research as a visiting professor at the Salk Institute for 2 years (1977–1979), in San Diego, California, and also worked as a consultant while setting up mushroom cultivation in India and Indonesia.

He went on to graduate from Wageningen University with a PhD in 1970. He studied the replication of the RNA of a 2-com-ponent plant virus. RNA replication was very new in plant virology; the only previous research on the replication of viral RNA was done by Sol Spiegelman and Charles Weissman using Qβ and MS-2 bacterio-phages. It was a fascinating time because this was a new area of biology—really the early beginning of molecular biology. He then was employed at the Rotterdam Medical School (currently known as Erasmus University) in 1969 and was sent to Paris for a year to learn more about oncogenic viruses. He subsequently returned to Rotterdam Medical School, and his first task was to set up an experimental pathology unit in the Department of Pathology under Professor Marco J. De Vries, who was an expert in graft-versus-host processes occurring in patients after organ transplantation and who was involved in early bone marrow transplants designed to cure various immune diseases. Rejection processes, tumor growth, and viral diseases were some of the reasons why it was important to study the effects of various oncogenic RNA viruses on hematopoietic stem cells. One of the observed effects was that apoptosis was responsible for the disappearance of embryos of mice when infected with the leukemogenic Rauscher virus during pregnancy.

From 1977 until 1979, Dr. Leo also worked as a visiting scientist at the Salk Institute with Marguerite Vogt and Inder Verma on malignant catarrhal fever virus of mice. These viruses were natural recombinants from wild murine viruses causing leukemia in inbred laboratory mice and had apparently picked up evolutionary genetic information for tumor growth and combined this with species-specific information for infection and replication. Dr. Leo considers this the most fascinating period of his scientific life. His work contributed interesting data on the role of xenotropic viruses and the recombinants with the regular Moloney leukemia virus that commonly induced T-cell lymphoma, but in the combination created an erythroid leukemia.

Dr. Leo was then employed by the Netherlands Ministry of Agriculture as the Director of the Mushroom Experimental Station from 1981 to 2001. There he established the most advanced institute for edible fungi in the late 1980s and 1990s, which became a worldwide commercial success thanks to the exploitation of “breeders’ rights” on the world’s first inbred white button mushroom strain, Horst-U1, created by Dr. Gerda Fritsche. While working for the Ministry of Agriculture he also worked (1986–1987) as a director to merge the National Institute for Plant Race Research and the National Institute for Seed Control.

From 1988 to 2003, he was an extraordinary professor of applied mycology at the Radboud University Nijmegen in the Netherlands, in which capacity he supervised a number of intelligent PhD students in achieving their doctorates. The research was devoted to all aspects of mushroom cultivation, including indoor composting methods. Together with his students, they studied various metabolic routes induced by degrading lignocellulose. Pests and diseases were studied, followed by studies of morphology and development and, most important, the genetic  aspects of the button mushroom, Agaricus bisporus, which led to highlighting significant properties of the mushroom.

From 2001 to the present, Dr. Leo has held the position of Guest Scientist at the Plant Research International of Wageningen University and has combined 2 facets of his earlier expertise in the field of medicinal mushrooms. He is also co-owner and Director of Research for Fungivital and Mushrooms4Health BV, based in the Netherlands. Our Research contains abstracts of Dr. Leo’s past research contributions on medicinal mushrooms, and What’s Ahead offers a glimpse into Dr. Leo’s current research projects.